Not too sure where this article originated from. It seems like the New Paper. Found it on one of the forums and pasting it here to share with all. Basically, it is about billionaire Peter Lim (one of Singapore's 40 Richest). The article is as attached below: 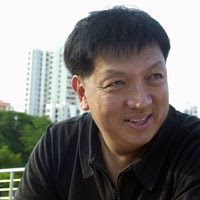 WHEN the Singapore stock market took a sharp dive lastweek, it wiped out more than $100million of his stock's value.

But former remisier king Peter Lim did not lose sleep over it.

Why? 'I've been a stock broker for all my life - I've seen all the crashes, financial crisis, where really, it's only a paper loss,' replied the self-made billionaire.

'Just make sure you are not jammed with cash flow.'

Mr Lim was referring to his almost 5 per cent investment in Wilmar International which saw its share price move from a high of $3.78 to a low of $2.89 in the space of a month. The share price last closed at $3.

To him, his wealth is less important than his family and philanthropy. His attitude towards money is almost casual. It reflects his philosophy on investing and wealth.

For those who feel they are badly mauled by the current share doldrums, Mr Lim has this piece of wisdom to share: 'I used to say to my friends, 'When you are holding stocks, if it goes up, don't be too happy; when it goes down, don't be too sad'.

'Otherwise, how? Your life will also be fluctuating and you'll die of a heart attack.

'If you really lose sleep over it, maybe the best way is to keep the money in thebank.'

So what does he lose sleep over?

He replies with a laugh: 'My kids. Like other parents, I worry about what they're doing and whether they'll pass their exams.'

On Thursday, he made his debut in Forbes' latest rankings as Singapore's seventh-richest man, with a reported net worth of US$830m illion.

Mr Lim revealed that he intends to give a large part of his money to society later. How will Singapore benefit?

Through his pet cause: Education.

He made this revelation quite casually, as if he were talking about the weather.

He said: 'I think it's very likely (that) a big part of my wealth will be directed towards education.'

'It will be either a straight donation towards assisting educational institutions or maybe I'll set up a foundation.'

Mr Lim echoed PM Lee's views that it is happening all over the world, and especially in the US.

'Asia is a bit behind because generally, when you have money, you think of your sons and your daughters when you die.

'But I think it has changed a lot here, principally because now, the wealth isbigger.'

He was reluctant to reveal his charitable contributions over the years, except to say that much of it was anonymous and that in the early '90s, he was one of the earlier donors to the National Kidney Foundation.

His friend, Mr Dennis Foo, chief executive of St James Power Station, later told The New Paper that Mr Lim not only donates money, he also takes it upon himself to deliver food, like rice and cooking oil, to needy families in one-room flats and old folks' homes.

Mr Lim said: 'Education must be cheap and accessible to anyone.

'For me, I was the son of a fishmonger, but I could still go to the best school. I had the opportunity to make money. There's no discrimination.

'I think this policy of meritocracy actually works. It's very very fair and nobody cancomplain.'

The New Paper managed to get hold of Mr Lim last Wednesday, after his meetings and before he left for a short trip overseas.

The publicity-shy tycoon was extremely reluctant to talk about his wealth. It didn't help that he again made news recently with his involvement in one of Singapore's largest reverse takeover bids, with his investment vehicle Rowsley buying up a chunk of a China solar power company.

But he agreed after some persuasion. He met us at Brewerkz, which he also has a stake in, at Riverside Point two hours before his flight.

Dressed in a polo T-shirt which has seen better days, a pair of cargo pants and trainers, he certainly didn't seem to wear his wealth on his sleeves.

Why so casual? He replied that he plans to sleep on his flight.

DOESN'T MONITOR
Ironically, Mr Lim, who was one of Singapore's leading stockbrokers and is now a private investor, does not monitor the stock market every day.

He goes through the financial reports of companies; he watches financial news to get a summary of what is happening, but he does not track the daily ups and downs of the stock he owns.

He said: 'I only check in intervals, depending on the company.

'If it's a structured company, then (I check) when the results come out. For the bigger ones, quarterly results; for smaller ones, twice a year. But if it's a start-up, I'll check it more regularly.'

Mr Lim made headlines in the late-'80s as a star remisier, in the mid-'90s in his divorce battle and in early 2000 for his involvement in the first instalment of the Raffles Town Club court saga.

Much of his wealth now comes from a single investment: Palm oil.

In the early '90s, he invested about US$10 million in a start-up Indonesian palm-oil company, Wilmar. Today, his almost-5 per cent stake is worth more than US$700 million.

This is a far cry from his humble beginnings. When he was young, he said, he did not even have his own room in the two-bedroom government flat he shared with 11 others.

He grew up, with three brothers and four sisters, in one of Singapore's oldest public housing estates, Bukit Ho Swee.

His father was a fishmonger and his mother a housewife and the size of the flat was the equivalent of a three-room HDB flat today, hesaid.

He slept in the living room, or wherever he could find space to lay his mattress down for the night.

On his wealth now, he said: 'It's no different from what it was before I had the money. It makes no difference after apoint.

'Like what they say, you can only talk louder. You can only eat so much and fly so many trips.

'Money lets you enjoy a lot of things, but I don't think I'll die without money.

'I don't think I'm eating a lot better than when I was a lot poorer than now. I don't really go for very special kinds of food. I'm still very local. I like my mee siam, mee rebus and lontong.'

Mr Lim completed his secondary school education in Raffles Institution and was an officer in National Service.

It was then, at the age of 18, that he bought his first lot of shares.

Did he make a killing?

He then went to Perth to further his studies at the University of Western Australia.

To fund his university education, he said, he worked part-time doing odd jobs as a taxi-driver, cook and waiter.

It was one of these jobs - in the Australian fast-food chain Red Rooster - that opened his eyes to how business was done.

It was also in university where he honed his instincts and skills as an investor.

He graduated with a degree in accounting and finance and stepped out into the working world.

'My first job was as an accountant. It lasted three months,' he said with a chuckle.

He did some tax consultancy before he went into stocks, he said.

Mr Lim is in his element when dealing with numbers. 'It's something I'm very comfortable with, something I understand.

'Give me any numbers. I look at (them) and I'm happy. It can be in any industry. You give me the numbers; somehow I can figure it all out.'

His secret to investing is...

WHAT is Peter Lim's secret to successful investing?

He looks at sectors.

'Like if I think solar is good, I go into solar; if I think palm oil is good, then palm oil.

'Share prices go up because the sector grows. So if I think this sector is going to be good in the next 10 years, then I'll just invest in it.'

Another key reason for his success, he said, is patience.

Mr Lim, who also acts as a consultant to companies and helps them find multi-million-dollar investors, does not subscribe to buying one day and selling the next to cash in.

His advice to young investors: 'You have to invest with a longer-term mindset. You buy a good stock, leave it there for 10 years. Come 10 years, this dollar can be many, many multiples.

'I think the trick is really to think long-term.

'The minimum length of my investments are five to six years, if not 10 to 12 years.'

He cites the example of his condominium.

He owns an entire 11-storey block at prestigious Ardmore Park, near Orchard Road. He and his wife, with his 85-year-old mother, live in one apartment, while three other maisonettes and the penthouse sits empty.

Same with Wilmar, which he invested in in the early '90s. It was then a US$10m investment. Now, his stake is worth some US$700m.