How Much to Give for Chinese Wedding

A frequent question that is often asked by many people is this: "How much to give in terms of money for a Chinese wedding?" For the uninitiated, there are many traditions that are followed in a typical wedding involving a Chinese couple.  One of these traditions is the giving of red packets (or what is known as ang baos) to the bride and groom during the wedding day itself.

While the red packet symbolises good luck and is meant to "ward off evil spirits", most younger Chinese couple do not really make this association with red packets.  It is more of a tradition that has been passed on from generation to generation and we just carry on this tradition as a form of blessing that we hope to give the newly weds.  This giving of red packets (with money stuffed inside) is somewhat similar to the Western culture of giving wedding presents I guess, with the exception that money is given instead.

While the amount of money packed inside the red envelope is not meant to be much of an issue, the amount given is usually meant to "reimburse" the newly wed for the expenses involved in hosting the wedding lunch or dinner.  Relatives, business associates and close friends of the couple and their parents might sometimes feel obliged to give more than that as it is  seen as "blessing" the couple and also forging good ties with the family.  It is not unusual for parents to give a large red packet to their children during the tea ceremony.

For most people though, the amount to give in the red packet will just be what is sufficient to cover the expense of the lunch or dinner that you are invited to.  For example, if it costs $1200 for a table of 10 people, most people will give around $120 to "cover the costs".  Of course, some might give a little extra just in case they are uncertain about the "per table cost".  In Singapore, if the wedding banquet is held in a hotel, be prepared to fork out anywhere from $120 to $160 per person.  For the more expensive 6 star hotels, it can go as high to $200 per person.

For info, the amount given by each guest is usually recorded down so it is assumed that the giver of the red packet will write his or her name down on the red packet to facilitate this process.  The reason for these records is so that the married couple can "give" back an equivalent or even higher amount of money in the event that he or she is invited to your wedding or even your children's wedding.  It is a weird concept even for many younger Chinese couples but it is part of the "do and die and don't ask why" kind of tradition we keep.

Here are some pointers when giving the red packet:

March 2016 Update:
The Straits Times newspaper came up with a guide on how much one ought to give for hotel weddings in Singapore. The figures are quite astounding add it is meant to just cover the cost per pax (see below): 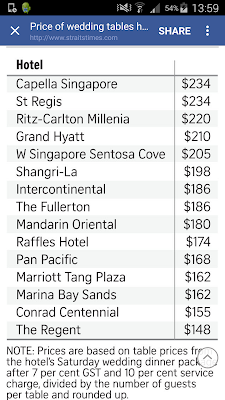 The above indicates that if you are invited for a wedding dinner at Capella Singapore or St Regis, you should be prepared to give a red packet of around $234 per pax.

Video by Jade Seah on How Much to give for Weddings:

=======
For those who are interested, do check out the following links

The Road to Financial Freedom: